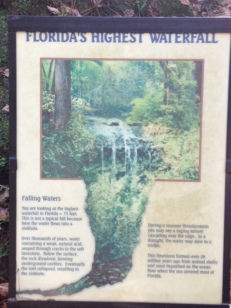 fall in all of Florida. Sign me up! I gotta see this. When we pulled into the park and up to the ranger station at the gate, the ranger on duty surprised us. Rather than the normal enthusiasm most rangers express for their parks, this fellow said, “yep, not much to do here. About a day is all most people can take and then they head out to find something better to do. You might want to check out the town.” Really? This is how you feel about the park you represent? Were you exiled from some plum park assignment elsewhere and now you spread discontent to all your guests? The park web site says, “this park has something for everyone…” The ranger didn’t seem to feel the same way.

Falling Waters is actually one of the highest hills in Florida. Rising 324 feet above sea level, Native Americans inhabited the area until British and Spanish settlers slowly pushed them out. Tall pine forests cover the hillsides augmented by magnolia trees with deep green leaves and dense clumps of saw palmetto and grasses. The area around the eponymous waterfall is punctuated by sink holes nestled in the underbrush and covered with moss. Peering through the foliage which is dense even in winter, it is difficult to see the sink holes clearly and the overall effect is one of decay, danger and mystery. Several streams wind their way through the brush keeping the air moist and humid. It was hard to imagine the earlier settlers making their way through this terrain. 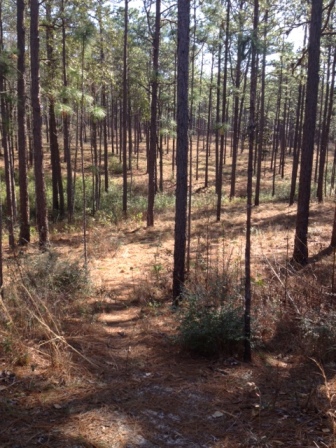 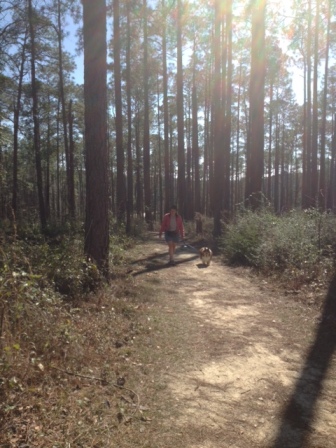 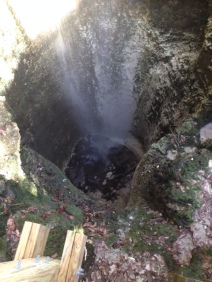 The waterfall is not quite what you might expect. Rather than looking up to view a tall cascade of water, this waterfall is actually underground! The waterfall is formed by a confluence of streams. The water from these streams thunders 100 feet down into one of the sinkholes. To view the waterfall, one stands on a platform and peers through the gloom to watch the roiling water disappear into a deep moss and vine-lined tunnel.

Our camp site at Falling Waters was nestled on a curve of the campground loop. It was a pretty intimate campground with only 24 sites. After so many weeks on the flat Florida terrain, it was a pleasant change of pace to be perched on the top of the hill. There wasn’t a huge amount of space between sites and tall pines circled our trailer. There were only a few hiking trails at the park. Many of them were actually painstakingly built board walks which wound a path between the shaded sink holes. A good portion of the trails had succumbed to the ever encroaching sink holes and were blocked off from passage. 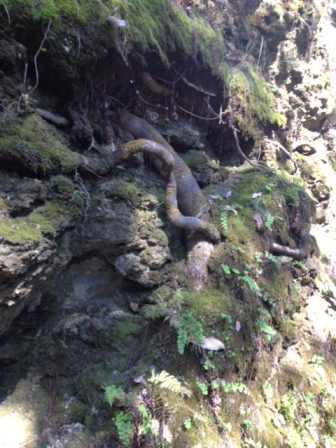 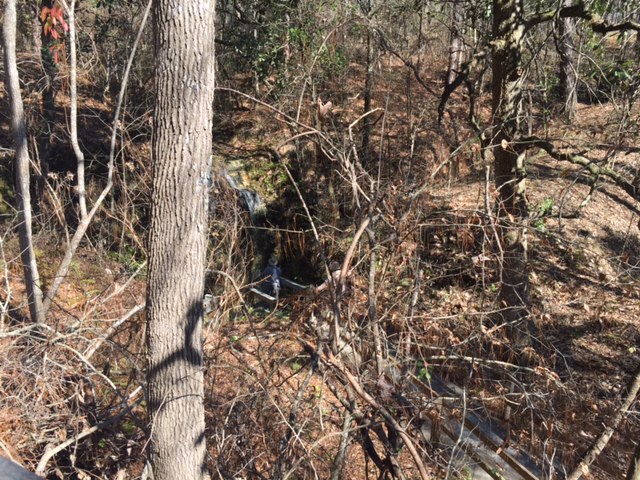 Taking the ranger’s advice, we did check out the local town, Chipley. Chipley made Chiefland look like a metropolis. Chipley did have a historic district. We followed the signs and did see a couple of old houses in fairly good repair, but other than that it was the usual mix of modest houses, some buildings which were downright shacks and the ubiquitous mobile homes. There wasn’t much else to speak of in Chipley. I hate to sound like a northern snob, but I am not sure I could live in a place like this. Of course, a big part of the lifestyle is hunting and fishing, but if you weren’t looking for outdoor recreation, you were looking in the wrong place. 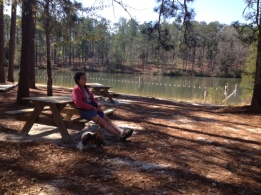 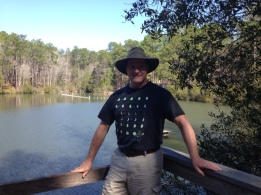 Whether it was the ranger’s initial ambivalence to the park’s attractions or our disappointment at the tallest waterfall in Florida, this was not our favorite park. Some of our estimation might also have been influenced by the tremendous affection we felt for Ochlockonee. But, hey, every park can’t be a home run hit, there have to be some walks to keep the game moving forward.