The second day’s big push across Texas took us from Crystal City to Eagle Pass and Del Rio on Highway 277. The scenery remained much the same with some brief interludes with less and then more vegetation. The area around Del Rio was dry and dusty, but the same could be said for much of the drive.

Our route followed the line of the border for a great distance. Border patrol cars were much in evidence. They seemed to be very active in insuring there were no incursions. Just past Del Rio, we encountered a surprise (for us) border patrol station. All traffic in both directions was being funneled into this mandatory stop even though we weren’t crossing the border. We pulled in and were confronted by an imposing and humorless border patrol agent. Where were we going? Where were we from? We showed him id which he scrutinized carefully. I felt guilty even though I knew we had no illegal aliens or substances on board. Dakota didn’t need to show id which is a good thing since he doesn’t have any. We were let through and breathed a sigh of relief. Not quite why we felt so anxious, but that is how we felt.

We motored on and our anxiety was slowly replaced by hunger. We began looking for a place to pull off and make a little lunch. Off to our left was the enormous Amistad Reservior. It continued for miles with signs directing traffic to different parts of the giant reservoir. It was an oasis totally at discord with the surrounding dry hills.

Just before we hit Langtry a sign appeared to our left which said “scenic picnic area.” We pulled off the highway onto a road which led upwards and around. Entering uncharted roads is always a little hair-raising. Would there be a turnaround? Would the road be passable for our Airstream?

At last to our right a magnificent vista appeared—far below us an impressive bridge spanned a wide river which had cut a deep ravine through the surrounding cliffs. It was breathtaking all the more so because it was so unexpected.

I felt a little dizzy taking it all in. We pulled to the curb in a large parking area with picnic tables and shelters. The wind was blowing and it seemed like we could topple on down the cliff. 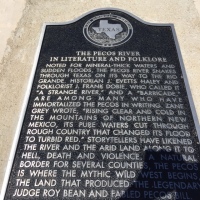 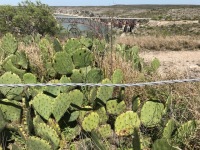 Back when we were in Navarre on the Florida Panhandle navigating the main road we had seen a remarkable vehicle ahead of us. It was an extremely tall and ungainly looking camper van. It was like nothing we had seen before. It perched on enormous tires which looked like they could have supported a tank. The strange looking camper sported french license plates and two motor bikes were strapped to the back. Clearly these intrepid souls had shipped their beloved camper to the States for a big tour. It was an odd and unforgettable sight.

Hundreds and hundreds of miles later in this parking lot perched high above the Pecos River, here was what looked like the same strange contraption. French plates, motor bikes and giant tires. Could there be two of these vehicles or had we miraculously re-encountered each other?

We sat in our Airstream contemplating the view and enjoying lunch. Finally, I could take it no more. I had to ask. I walked over to the strange vehicle. It was so high the steps to gain access were actually a ladder. The door was open. The occupants were likely enjoying their own lunch.

“Pardon? Pardon?” A woman appeared in the doorway. “Bonjour! Parlez vous anglais?” “Non, mais mon marie parle anglais.” A nice looking man about my age appeared. “Bonjour!” I asked if they had been in Navarre near Pensacola a few weeks ago and they replied that they had. “C’est incroyable!” We saw you there and now we have run into each other again! The man agreed it was remarkable that in such a big country we would encounter each other again. He translated for his wife. There was much smiling and nodding and further expressions of amazement. We wished each other a good trip and I returned to Jim, curiosity satisfied. Shortly after, the big camper van pulled away as our frenchmen continued their journey. We followed moments later. In all the parking lots in all the world…

The landscape was arid. The air was warm. The highway wound through hills and valleys dotted with dusty scrub, mesquite and rock formations. We passed signs directing us to Big Bend State Park. Another place we would love to see, but must save for another trip. 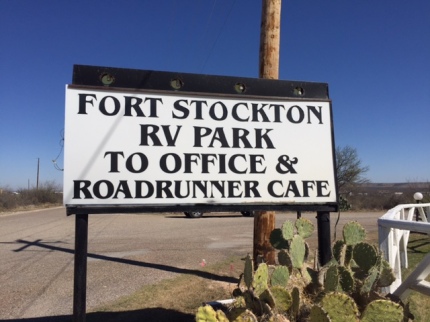 We reached the Fort Stockton RV Resort in the late afternoon. The sun was beginning to set and, while it was still very warm, it would cool quickly once the sun was gone. The rv resort was large with a few brave trees dotting the camp sites. Half the park was devoted to transients and half the park was clearly comprised of full time residents.

It had been a long drive, but one full of new sights and adventures. We were tired from so many miles, but we unhitched knowing the next day was not a travel day. We would explore Fort Stockton. The ever present wind was blowing and we opened all our windows to catch the breeze. After Fort Stockton we would have one last leg in our hop scotch across Texas.