The Arkansas we drove through after leaving Cane Creek flattened out and the sun burned down on the planted fields. We were heading south and east. This seemed to be mostly farm country with small towns parsed along the highway.

At McGehee we passed the Japanese Internment Camp Museum. Sadly, it was closed and we could not stop. It was late April and the thermostat already registered over 80 degrees in late morning. There were two internment camps in southeastern Arkansas, one in Jerome and one in Rohwer. Most of the Japanese interned in the two camps here were relocated from California. Life had to have been incredibly difficult and uncomfortable. The climate was tough, not the gentler climate they must have known in California. The camps were spartan at best. These people were held for years. The Museum opened four years ago. George Takei, who was interned at Rohwer as a small child, was on hand for the occasion. That was big news in these parts. 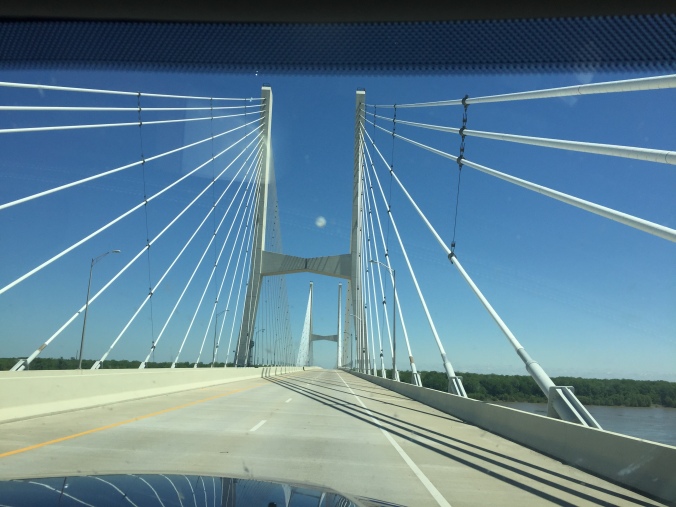 We flew across the graceful Greenville Bridge over the Mississippi at Greenville. Built in 2010, this was the fourth longest cable-stayed bridge in North America when it opened. It replaced an older bridge which was obsolete. There aren’t that many places to cross the Mississippi. We were back on the eastern side of this dividing line. We were back in a state which had earlier charmed us with its beauty and the grace of Natchez.

Our destination was Grenada Lake just outside of Grenada, MS. We were staying at the North Abutment Campground which proved to be nestled at the northern end of the Grenada Dam.

We didn’t quite know all of this at the time. What we did know was that Grenada was a fair-sized town in central northern Mississippi. We drove through town noting that every fast food chain one could imagine was represented. Blindly following the GPS instructions, we left town along Scenic Highway 333. The road wound through woods. We really didn’t have a clue where we were going and struggled to read the signs.

Suddenly we broke out of the woods and the most enormous lake appeared to our right.We both exclaimed at the gorgeous blue water reflected under blue skies with fantastically puffy white clouds. We crossed the 2.6 mile length of the mighty Grenada Dam and found our campground at its northern end.

The Yazoo Headwater Project which created Grenada Lake with the construction of the eponymous dam was completed in 1954. Built by the Army Corps of Engineers, this was a massive project. Designed to protect approximately 1.5 milliion acres of the Yazoo River Basin from flooding, it also provided endless opportunities for outdoor recreation.

Those army engineers weren’t fooling around. We drove across the enormous dam admiring the lake to our right and, far below to the left, the protected valley and the Yalobusha River flowing through it.

The North Abutment campground consisted of two separate camping areas. Unlike most parks, there was no real entrance gate and we felt our way to the site which had been designated on our reservation.

This was the flattest, longest and most perfect campsite ever constructed. We barely bothered to check our side to side and front to back levels. Of course, when we did, they were perfect. Even more perfect was the breathtaking view. Jim dubbed this the country club of campgrounds and he was right. 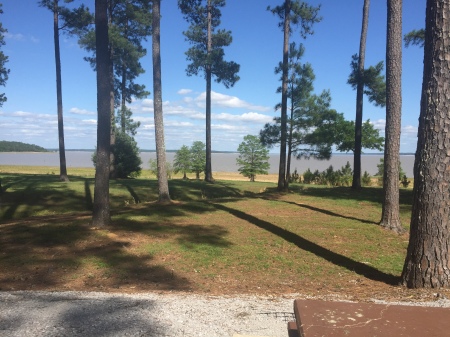 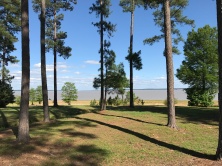 Early in the week, the campground was pretty empty. We relished the delightful weather, the gorgeous view and the serenity. It was deeply restorative.

We had only two nights booked at North Abutment. That left us with one day to enjoy the place. We didn’t do much at all. We relaxed at our campsite. Oddly enough, we almost never sit around relaxing. Unless the weather is bad, we tend to be out and exploring. It was a nice respite to spend some time reading and knitting and listening to music. 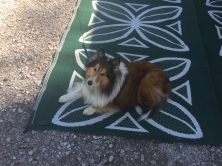 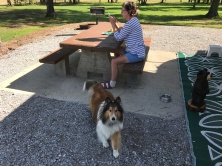 In the afternoon we made one brief foray into town. There were a couple trails to hike, but we didn’t have the heart for it. We talked a lot about the need to avoid ticks moving forward. To say we were obsessively haunted would not be totally overstating things. We needed to undertake a tick avoidance program (TAP). Hiking those trails didn’t seem worth it.

Grenada Lake is a big destination for fishermen. The lake when full in summer consists of 35,000 acres of water. It boasts 148 miles of shoreline. In the winter they draw down the water and it shrinks to less than a third of its summer size. At flood level the dam can hold back 64,000 acres of water and the shoreline swells to 282 miles. The whole project is immense. 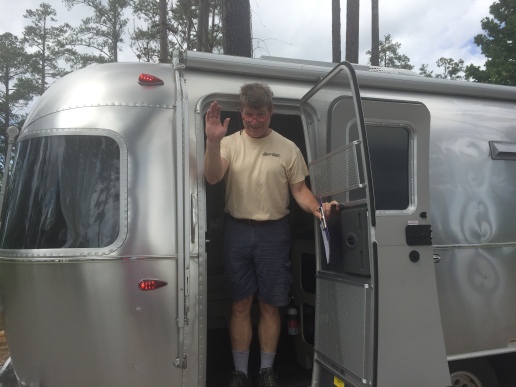 We hated to leave after our second night. We toyed with staying another day, but rain was predicted and it seemed best to move on and keep to our schedule. Hitching up was a dream on our perfect pad. The truck and trailer practically hitched themselves and we headed out to the next adventure.