The highways from Carlsbad to Monahans were packed with trucks moving products associated with or derived from the oil fields, potash mines and fracking. The arid desert fields were yielding all sorts of valuable products and every mile was devoted to the serious business of extraction. Well services, pumping specialists, welders and RV lots with workers quarters rounded out the offerings in the small towns we passed.

We crossed the state line from New Mexico to Texas and immediately lost an hour as we moved from mountain to central time. The state and time may have changed, but the landscape remained the same. We would have liked to travel into northern New Mexico, but we had passed the halfway point in terms of the time we had for our adventure. We would have plenty left to see for our next trip. 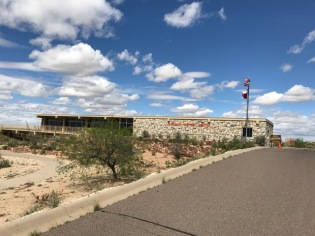 We turned off Interstate 20 into the Monahans Sandhills State Park and entered another world. This park is a strange oasis of sand dunes. It bills itself as a family getaway where kids can saucer down the dunes on plastic discs. The discs are rented at the ranger station.

Far from finding hordes of families with children clambering the dunes, we found a quiet, almost deserted campground. The campground loop boasted 24 sites, but fewer than ten were occupied. The landscape was beautiful. The mounded dunes rose and fell in undulating hills. Campsites were nestled between the dunes and neighbors were barely visible. It was warm in the sun. Close to 90 degrees, but in the shade under the shelter at our site there was a cooling breeze. 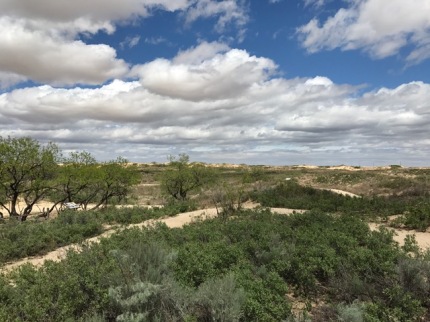 We set up camp happily all the while marveling at the unexpected beauty. We hadn’t broken out our mat and chairs in Carlsbad, but now we did a full camp set up. Dakota’s tether was set so he could sit under the shelter in the shade or on the mat next to us and the trailer. We relaxed looking up at the vast blue skies with brilliant white, fluffy clouds. Jim scampered around taking pictures. We were so happy to have two nights in this amazing place.

Far off to the west we noticed dark grey clouds roiling in the sky and the unmistakable trace of rain descending from the clouds. We watched with naïve enjoyment as the clouds drew closer and flashes of lightning sliced the sky in the distance. The storm was moving to the north and east and looked like it might miss us. It didn’t. Strong winds accompanied the driving rain as it hit us and we scattered to batten down chairs, the mat, put awnings away and shelter in the trailer from the driving storm. It was a big Texas storm. 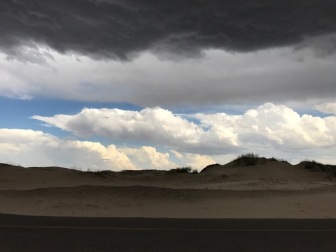 We had reception for one English language television station and we watched the constant weather updates to monitor the progression of two separate fronts which were colliding to form these giant storms. Red flag alerts were issued and at least one tornado touched down closer to Midland which was east of us. The weather woman, who was quite accomplished, urged everyone to seek their safe places. This storm was serious business.

The storms were moving north and eastward and eventually we could see the cells had passed us. The skies had cleared and blue sky and fluffy clouds regained their hold on the horizon. “Hey, Jim, let’s take a walk around the campground loop and check out the bathhouse.”  We got Dakota on his leash and headed out for a perambulation. As we walked the asphalt path, off to the west the skies dimmed again. We were only somewhat aware of this turn in the weather. Just as we reached the point in the park furthest from our Airstream, the dust storm hit.

The sky turned an ugly olive green. The air was thick and dark. The winds almost blew us off our feet and the sand stung our skin and threatened our eyes as it struck us with tremendous force. We started running to get back to the trailer to secure it against the onslaught. Dakota was dragging on his leash. I grabbed him up to shield him from the sand and wind and struggled to keep running. Jim tried to offer shelter by turning and running backwards, but it only slowed us further. “Just run for it!”

We reached the trailer as the full fury of the winds struck and Jim was almost unable to swing the trailer door shut against the blasts. The trailer rocked with the force of the winds and the dunes were whipped with lashes of sand. The television reception pixilated with the atmospheric disturbance, but the weather woman reported wind gusts from 65 to 70 miles per hour. How heavy is this trailer again?

Reporting weather in a place like west Texas must be the epitome of professional satisfaction. The young and attractive woman reporting the weather on our sole television station was the center of attention and interest. She was clearly good at her job and she sure had a cornucopia of weather events to report: rain, winds, hail and tornadoes. She urged those east of us again to seek their safe place and move their cars. This was clearly a familiar drill.

We quelled our nervousness watching the Spanish language broadcast of the Trinidad and Tobago vs. Mexico football match. Mexico won by a goal, one nil. Eventually the winds subsided. Jim broke out his ancient iPod and we listened to The Dixie Chicks and read until bedtime. The peaceful evening was a marked contrast to the maelstrom which preceded it. Wonder what tomorrow will bring?

The next morning heated up quickly. It was easily 90 degrees in mid-morning. The wind was still blowing strongly and periodically grey clouds would skid across the sky. We were still feeling a little undone by the previous night’s weather events. 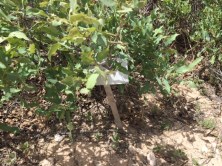 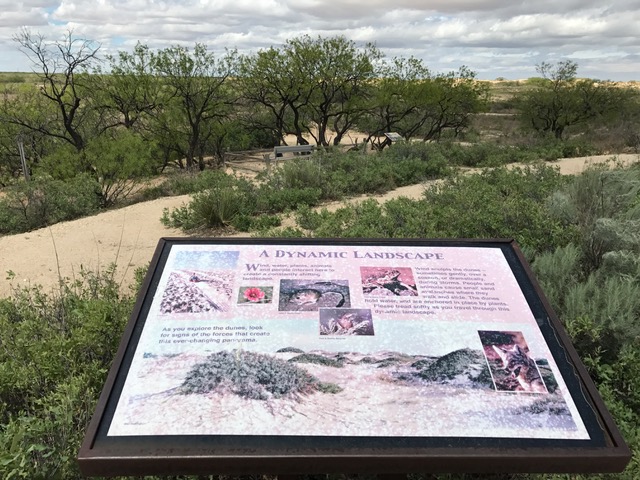 We stopped by the ranger station to see their exhibit on the sand dunes and the nature trail and ended up in a long chat with the ranger on duty who explained a bit about the back story of this amazing stretch of sand dunes. Mr. T (Tavares) demurred he was not an interpretive ranger, but he had a pretty excellent way of explaining this remarkable landscape. He said that over 10,000 years ago, this approximately 30 mile wide swath of sand was created when sands from the exposed flood plains of the Pecos River were blown and deposited against the Caprock Escarpment.  The winds had formed a river of sand.

His example of the ecosystem of the dunes employed a sponge analogy. The water table in the sponge (dunes) was what held the sand pretty much in place. Sometimes the water table was higher and sometimes lower and when it was lower the sands would shift, but they would never completely blow away or disappear because the water table held them in place.

Also helping to hold the dunes in place is the vegetation. Because the water table varies, the scrubby trees which cover the dunes extend their roots up to 150 feet into the sand. Their roots anchor the dunes. Honey mesquite and havard shin oaks are found all over the park. The havard oaks actually look like bushes, but they are actually small trees.

Mr. T. said that before Katrina, the park had gone through a 15 year drought. The water table had dropped year after year. In the wake of Katrina over 50 inches of rain fell replenishing the water table. That fall the dunes were covered in brilliant carpets of wild flowers. It was magnificent and ironic since that same weather event had also caused such destruction and damage elsewhere. We really enjoyed our time with the ranger and left with a much better understanding of this remarkable environment. 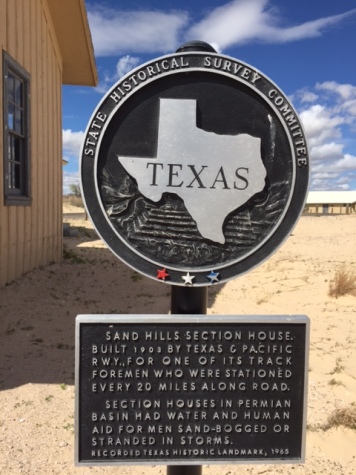 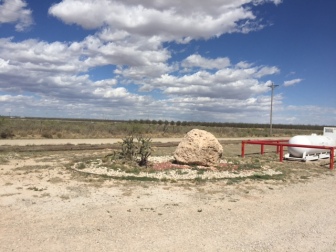 Of course, our last morning dawned cool and sunny. It was just as delightful as that first afternoon had been when we had expectantly deployed our mat and chairs only to be assailed by Mother Nature. It was time to hitch up. Our mat was still buried in sand where the wind had tossed it against the trailer. The chairs were covered by sand as was Dakota’s tether. The Airstream was streaked and dirty from the lashing of the rain and sand. 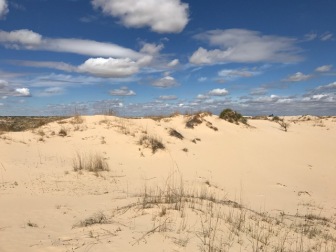 At long last, I am finally posting! The picture above seems ancient, from way back in November–several centuries ago! Newer images will follow.

Those of you who know me well will not be surprised to hear that I feel guilty that I haven’t written a blog entry to date. I promised everyone I would. There are two reasons for this. The first reason is that new experiences have been coming at us so fast and furious that there has been no time to process all of the information, emotions and ideas. The second reason is that we have been incredibly busy. Every minute of every day. I guess those two reasons are closely related, almost redundant, but all the more compelling for it. 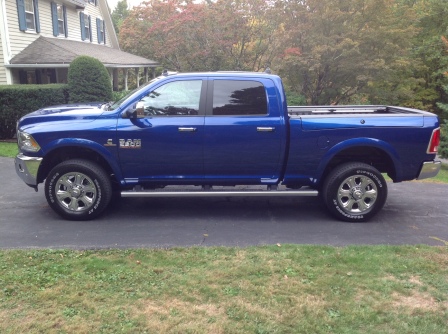 But I won’t bury the lead here. Don’t you want to know as you read this if our adventure is what we dreamed it would be? In a word, yes. YES! I won’t say there aren’t moments of stress (mostly due to our newbie status), but life on the road in our Airstream is everything we had hoped. Our little Airstream house is comfy and cozy. We have all the things we need including each other and, of course, Dakota. We are developing our routines and creating those comfortable expectations of life. And I have to say when I wake up in the morning, my first thought is tremendous happiness that we are here and there is much more ahead of us. 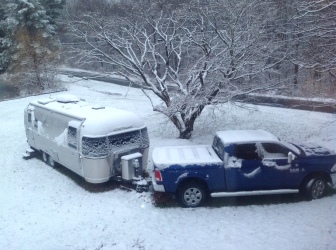 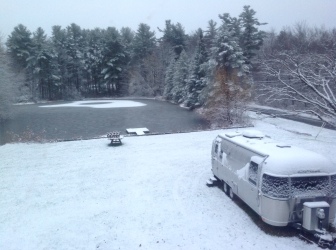 We took off on our big trip on January 3rd. December was a month filled with preparations. We almost didn’t get to go at all…due to big snows in CT followed by thawing ground. The Airstream was very visible in our yard and, as with all small towns, much remarked upon. After the big snow and then the big melt, the Airstream was deeply mired in our yard. Many up and down the road said we would never get it out. Even if the ground froze hard so we could pull it, it would then be frozen in place. Popular sentiment was that we were…in deep trouble. But with a little help from a new friend and Jim’s innovation, we were able to finally extract it and move to safer ground.

Safer ground was not without its own dangers as a dented bumper would attest. Our first destination upon leaving was the Airstream dealership (the Mother Ship) in Lakewood, NJ for some fine-tuning and repairs. Thanks to the patience and support of the team there, we were soon good as new. 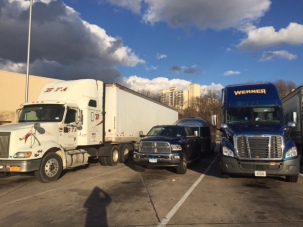 Because of the seasonal cold, the Airstream was still winterized. That means none of the water systems were working. We couldn’t use the sinks, shower or bathroom. Our original plan had been to de-winterize in Ashland, VA.

First lesson in life on the road, plans are made to be changed. The cold and snow dogged our heels. While we really liked the countryside around Ashland and our campground, horror stories of impending snow and ice forced us to flee south to Greensboro.

Want to know what happens next? Sign up, the next installment will be along shortly…