We left Texas via Texarkana. Our route into and through Arkansas was atypical in that we were on a major highway. Interstate 30 headed northeast taking us in a direct line past Hope (birthplace of that most famous Arkansan) and directly up to the Hot Springs area. The truckers in Arkansas appeared to be fierce and not terribly thoughtful. Usually, truckers make space for us to change lanes and there seems to be a brotherhood among us. These truckers seemed intent on running us right off the road. 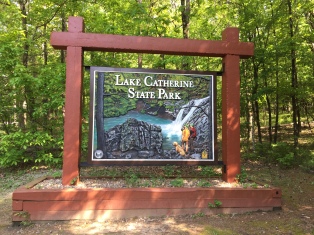 Our next stop was the Lake Catherine State Park. The land for this park was donated to the state in the 1920’s when Harvey C. Couch, a very successful local businessman, built the Remmel Dam to generate hydro-electric power. The power station was later switched over to natural gas and oil. This is one of a pair of man-made lakes and dams serving the Hot Springs area.

The park is quite pretty. The campground at the park has two sections for rv camping and a group of cabins. The park caters especially to fishermen and golfers. Just before you reach the park, there is a large public golf course with housing and a restaurant.

Our site was beautifully situated right on Lake Catherine. Our lounge backed up to the shore just a few feet away. Tall maples ringed the site. Our neighbors to either side were a discreet distance away from us. Groups of quacking ducks and honking geese were our constant companions for our stay along with a heron or two. Once again, we got out all of our paraphernalia and decorated our site.

Did I mention the power plant dominates almost any view of the lake? Yes, right in front of us on the opposite shore of the lake sat the hulking power station. It was an omnipresent anchor to our, and anyone else’s, view of the lake.

Of course, without the power station there would be no Lake Catherine. It gleamed in the sun and emitted a constant low-level hum. At night it was aglow with light and continued to emit that low-level hum. Like an unwanted dinner guest with bad table manners, it had pulled up a chair at the head of the table and anyone else at the table could only avert their eyes to enjoy the otherwise sumptuous spread.

This we did. We sat out in the evening air and watched as the sun slowly set and the world darkened around us. The power plant glowed and hummed and we steadfastly enjoyed a quiet evening at lakeside. 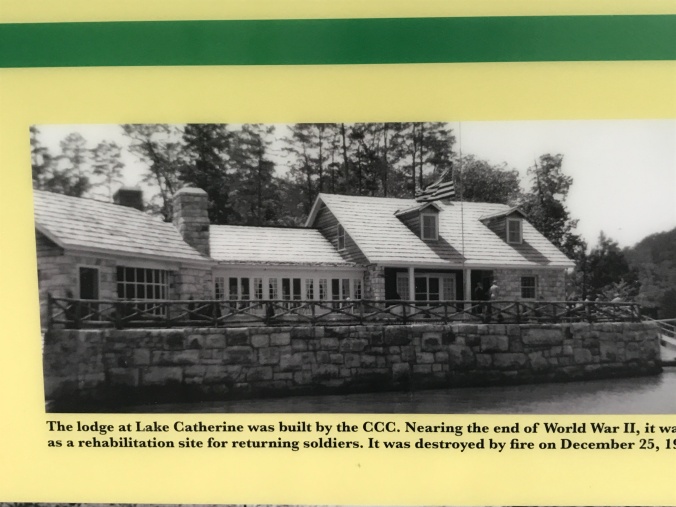 This park had quite a nice system of trails so the next morning we packed our lunches and headed out to hike the park. At the trail head there were interpretive signs informing us that this park, too, owed its infrastructure to FDR and the CCC. 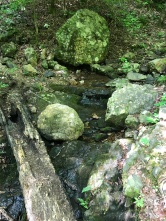 We had a planned route but, as happens all too often, we missed a trial turn and ended up taking a different route. We both agreed this was actually much better. The first trail was called the Falls Branch Trail. It was a wooded trail and mostly followed the course of a small brook winding up and down rocky, mossy hills. There were lots of little water falls and it was cool and comfortable hiking in the woods.

To get to our next trail, Falls Creek Falls, we crossed the Falls Creek by the pretty waterfall for which it was named and headed up a steep and rocky trail. Our plan was to break for lunch at a spot on the top of a ridge with views down to the lake (and power plant) below.

We were out of the wooded area and hiking through tall grass and bushes at this point. It grew much warmer in the sun. We had feared we would leave behind good hiking as we headed east, but this trail made us feel there was hope for more good hikes in the future.

We made it to a bench overlooking the wooded hills and peaceful lake below us. We broke out our sandwiches. We were happily munching away when we became aware that we were sitting in the middle of a huge tick colony. Ticks were falling from the bushes onto us, crawling up our legs and swarming Dakota. For some reason, that ended our lunch break quickly. We gobbled last bites and retook the trail at a fast pace.

The rest of the day’s trail was easy walking and we made good time looping back to the Falls Creek Falls. From there it was a short hike along the banks of Lake Catherine back to our trailer.

The first thing we did back at the trailer was get out the tweezers and flamestick and check Dakota for ticks. There were quite a few. Ugh. We checked ourselves as well. The ticks made a satisfying popping sound when they were incinerated.

Rather than do more hiking at Lake Catherine, the next day’s plan was to head in to Hot Springs and visit Bathhouse Row and hike in the national park. Hot Springs National Park claims to be the first national park. The hot springs in the area had been drawing people for years and the area had slowly been developing in a haphazard fashion. In the 1830’s the federal government took the unprecedented step of “reserving” large parcels of the land for use by citizens. The creation of Hot Springs Reservation was the first attempt by the government to protect a natural resource. It was a bit ham-fisted, however, and failed to clearly delineate boundaries. 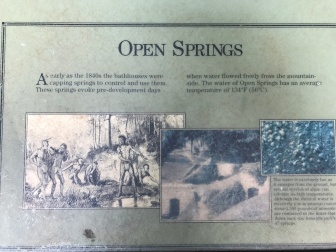 Over the years the bath houses in town had evolved from tents and crude lumber shacks to wooden structures. Hot Springs Creek ran right down the main street. The town was subject to frequent fires and the creek regularly flooded. In the 1880’s the federal government covered over Hot Springs Creek so that it ran under the main street of town. Next the government approved private development of new and more elaborate bath houses. Hot Springs’ reputation and popularity soared. 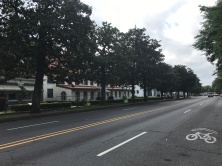 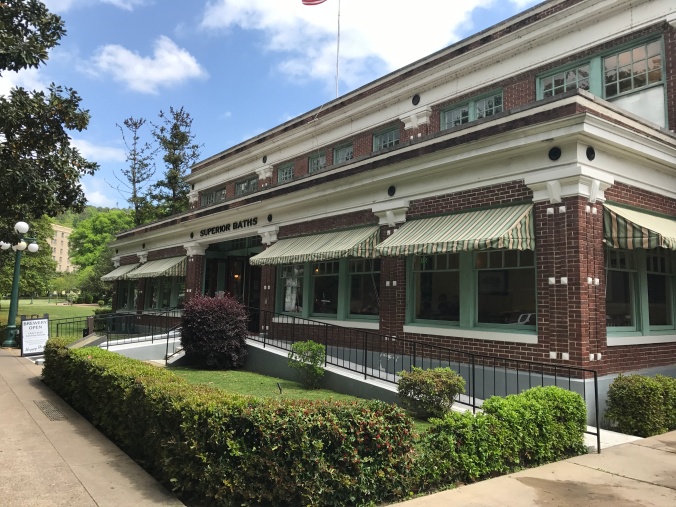 This popularity endured until the 1950’s when healing cures fell out of fashion and the bath houses slowly declined. Today only two of the bath houses are still in operation. The Fordyce, arguably one of the most elegant, now serves as the Visitors Center for the national park. 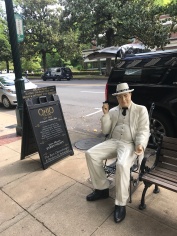 Walking through the Fordyce was a treat. We took turns. One of us stayed with Dakota on the wide front porch while the other savored the vestiges of a bygone era. It was beautifully preserved, an elaborate and gracious emblem of the past. 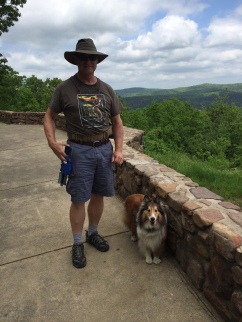 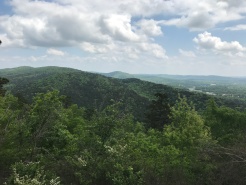 The parking lot gave us a grand vista from the top of the mountain across wooded hills and the town below. It was very warm as we hit the trail. The sun was strong and the air heavy. We stepped off the trail to enjoy another overlook. When we got back on the trail, I noticed Dakota already had a tick on his paw. I removed it and we continued.

There were a few other hikers on the trails which was surprising since they seemed somewhat overgrown. I was feeling twitchy about ticks. We stopped for lunch at a stone shelter by the road. Sitting there eating my sandwich, I found another tick crawling on my arm. We never did see Goat Rock. If there was an actual Goat Rock, it eluded us. We completed our hike on the upper loop of the Dogwood Trail. I couldn’t find any dogwood either.

Back at the parking lot we checked Dakota for ticks. They were everywhere. We kept finding them and scrunching them into the pavement. I lost count around thirty. It was a total nightmare. Every time I ran my fingers through his fur, I found more. And more. Finally, it seemed we had them all. We got back in the truck and headed home, stopping in Hot Springs at a Kroger for groceries.

As we entered the park, I found a tick in my hair. We both felt itchy all over. When we got back to our camp site, I swept off the mat and laid Dakota down for another tick check. Unbelievably, we found more ticks. We found a few dead ones which meant we had missed them from before. We also found a few which had latched on to his skin. With dark satisfaction, Jim incinerated each tick, even the dead ones, with the flame stick. We felt terrible that we seemed not to have been diligent enough to protect him.

Sadly, we were no longer comfortable in this camp site. As I stepped into the trailer, a small tick fell from overhead onto my hand. In my research on ticks, the CDC said ticks can only crawl up their hosts. Experience proved otherwise. Later while sitting on the bench seat, I looked down to see another tick beside me. We felt under assault. Obsessively, we continued to go over Dakota checking for missed ticks.

We holed up in the trailer. No more sitting outside on our mat enjoying the night air and scenic view of the lake and power plant. We contented ourselves with the view through the screened window.