Sunday brought an end to our stay in Village Creek. It was a bit grey and rainy as we hitched up and pulled out of the park. 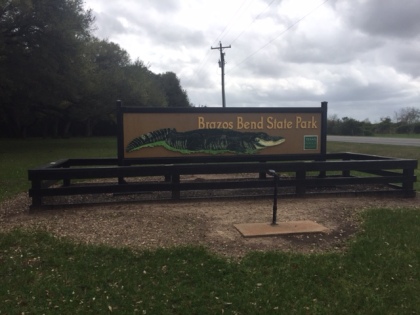 Deluge doesn’t even begin to describe the rain which assailed us on our drive south from Lumberton to the Brazos Bend State Park just south of Houston in Needville, Texas. The rain fell so heavily that we barely had visibility out the windscreen of our big blue truck. It fell in sheets and torrents. Thank heavens for Jim’s steady nerves and careful driving. He piloted our 48 foot craft skillfully through the darkened land and kept us from disaster. I shudder to think what would have happened if I were driving. At moments like this my strongest impulse is to shriek with horror and throw my hands in the air. Not exactly a prescription for safe driving.

Our progress was slowed by the weather and even more so by a terrible traffic accident on Interstate 10 in Houston. Traffic slowed to a complete standstill and we spent well over an hour inching our way forward. When we reached the accident, we saw some poor eighteen wheeler had hit the cement divider on the outer shoulder. The cab was completely separated from the trailer which still stood nose to the divider. The cab was crumpled like an aluminum can and had clearly burned as well. Cleaning this up in this weather was going to be a considerable challenge.

The rain followed us further south down Route 288 past Pearland and along Farm to Market 1462 to the park. We set up camp in the rain and were just able to sit out under the awning. Despite the fact that the ranger said the park was fully booked, we were almost completely alone. Was it the unrelenting rain? Just the fact that for people down here, this is winter? Who knows. It was a little strange coming on the heels of Palmetto Island. We felt lucky to have the park to ourselves, but where was everyone? 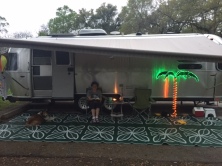 Our site was just lovely. We were nestled next to a large live oak who was our guardian. We were feet from the banks of the Brazos River and the park teemed with deer, all kinds of birds and big Texas armadillos. All were much in evidence during our stay.

Jim’s oldest brother, Jack, his wife, Phyllis and their friend, Dan, arrived in late afternoon. The rain was still falling but we could shelter under the awning and stay mostly dry and enjoy looking out at the verdant and sodden landscape. We spent several hours chatting and enjoyed brats and burgers for dinner. It was really great to see them. We don’t get to spend that much time with them and certainly had never had the chance to see them in their natural environment of Texas. Plans were made to head up to Pearland on Tuesday to see their home and get some necessary shopping done in the shopping centers there. 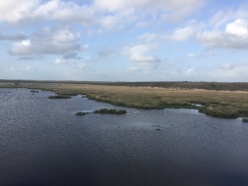 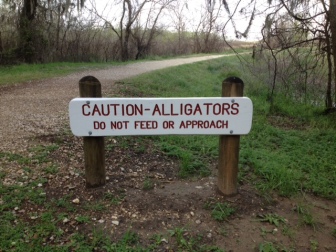 The sign welcoming visitors to Brazos Bend makes it clear who the primary tenants of the park are. The morning of our first full day in the park was devoted to laundry. The rain continued off and on, but it

was quite relaxing to sit near the laundry and read. By mid-afternoon we were restless. The rain cleared off and the long absent sun appeared. We walked a trail around 40 Acre Lake. There was a nice breeze and it was warm, but pleasant. We saw several gators enjoying the sun. But once we hit the woods at the end of the walk, the mosquitos were unrelenting.

Tuesday dawned dry and we headed to Pearland—named for the former pear orchards which abounded until man discovered big box retailers—and some shopping as well as a visit to Jack and Phyllis’ house. One major goal was to get Jim’s electronic equipment up to current standards. After several hours and success at the Verizon store, we headed to Jack and Phyllis’ house in a very attractive, older development. Dinner that night was completely delicious barbecue and then we headed back to Brazos Bend. 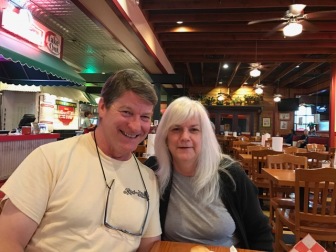 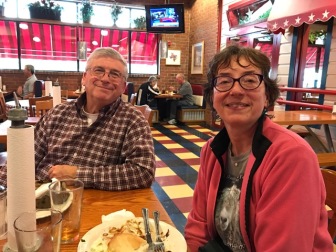 Wednesday was alternately wet and dry, but we got in a nice hike around the Old and New Horseshoe Lakes and Elm Lakes. The two horseshoe lakes were formed by a river’s switchbacks slowly being cut off from the primary river. Over time the lakes fill in completely with vegetation and it was easy to compare the relative ages of the two lakes just by looking at the disparate landscapes around them. Old Horseshoe was well on its way to becoming marshy land while New Horseshoe was still very much a body of water.

We added to our walk with a loop around Elm Lake. Elm Lake was alive with bird life and alligators. This was their turf and they lined the banks of the lake. I got so nervous about them chomping down on Dakota that each time we spotted one, I carried him past. Nothing spoils a trip faster than a beloved dog becoming gator lunch. Jim tried repeatedly to get a good shot of one of them with his phone, but it was nerve-wracking to try to get too close. Nothing spoils a trip faster than losing part of a spouse.

We were just at the end of our loop when we heard a loud, sudden crack like a tree falling. Just across an inlet in the lake, a big gator had clamped his jaws down on an unfortunate egret and we watched with sickened fascination as the bird disappeared into the great creature’s gullet. 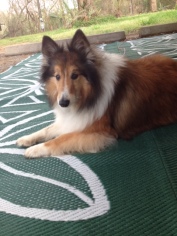 The sky was dark and overcast as we headed south to our next destination. Moving from park to park is a little like falling in and out of love successively. There is a mixture of sadness to be leaving and an itchy desire to be moving on to the next adventure. Our next adventure would be Goose Island State Park in Rockport, Texas.