Our crossing to Naples was not without incident. For the last stretch of our drive we followed Route 41 and then exited to a street paralleling 41. It had been a long drive and we were tired. Well, at least I was tired—something has to account for the major brain fart I was about to have.

As we neared the entrance to the next rv park, Jim said, “are you sure this is where we’re staying?” What? Huh? I panicked. Is this were we were supposed to go? I freaked out and told him not to turn in to the gate. We cruised past as I scrambled to find our reservation information and confirm our destination. It wasn’t until we were a good half a mile down the road that we realized the road came to an abrupt end and the only possible egress was a hard right turn. 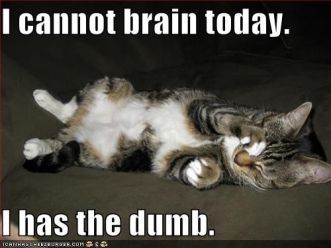 The hard turn to the right wasn’t a problem in itself, but arranged vertically at the side of the turn was an assemblage of signs saying, “No Trespassing,” “Private Road,” “Do Not Enter!” “Proceed at Your Own Risk.” It was hot and we were tired. Within our trailer was general consternation. It was too far to back up to the entrance to the park and we desperately needed a way out or a place to turn around.

Despite our somewhat bleak circumstances, Jim did not utter an angry word or get upset. His wife, the Chief Navigator, had just pulled a major boner and we were in deep doo doo, but he was calm and quiet. It was hot and we were tired. Within our trailer was general consternation. It was too far to back up to the entrance to the park and heading right didn’t look like too good an option either.We sat quietly for a few moments, then Jim said he was going to brave the intimidating signs and walk ahead for a place to turn around. With 48 feet of truck and trailer, we couldn’t risk not finding a place to turn around.

I sat in the sun for a long time feeling stupid and useless. Jim was gone for a long time. Finally, I realized Jim had chosen the low tech path, but there was another option for determining what lay down the forbidding road. I downloaded Google Earth and found our location. Down the road about a mile was another road intersecting at a perpendicular angle. We could definitely use those 90 degree angles to effect a turnaround. Jim’s cell lay on the console. There was no way to let him know and I had to do something to redeem myself.

The forbidden road was narrow. I made the turn on my maiden voyage at the helm of the Airstream at a cautious speed. I felt alternately terrified to be driving Jim’s beloved rig and hopeful that somehow I would redeem myself. The road continued to be lined with hostile signs. “Turn back now.” “This means you!” sporadically driveways intersected the road and each bore “Beware of dog” and “No Trespassing” signs. This was the most unfriendly road on the face of the earth. What was their problem?

Jim came into view. How best to describe the look on his face when he saw his beloved blue truck and Airstream heading his way…horror? Terror? Deep love and affection? Maybe not the latter. Just then a truck pulling a horse trailer came into view heading my way on this incredibly narrow and unfriendly road with steep sides. My palms were drenched as I contemplated what would happen if we couldn’t pass each other. It drew closer and closer and, with inches to spare, we made it. I came to a stop as Jim approached the truck.

We executed the turnaround and headed back out the unfriendly road. We were both sitting kind of low in our seats in case gun fire should ring out. A battered pickup driven by a wild-eyed, bearded man passed us going the other way, he pounded the air with his fist and shouted at us and we sat even lower in our seats.