Jim was fascinated by a building in town with a bright and shiny cupola. This proved to be the Marquette Regional History Center. This was yet another sweet, well-curated museum laying out the natural and human history of the area on a chronological timeline. The museum may have been “sweet,” but it laid bare the inescapable fact that life in this resource rich land was very tough. It was a harsh land which fought being tamed and exploited.

First up was the natural life of the area with a fine display of beaver life. Beavers were abundant in the UP. They did not mind the 15 feet of snow in the winter and reveled in the marshy tundra. They may indeed have been the first inhabitants. It was fascinating to learn that some hutches have been inhabited by generations of beavers over hundreds of years! 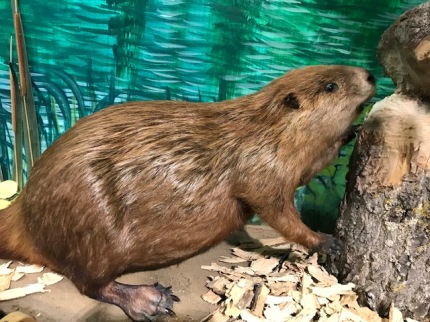 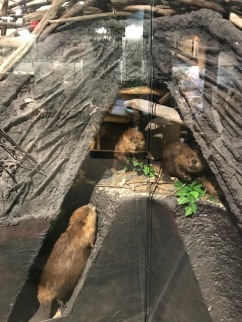 Not to be shortchanged was the area’s dominant feature, Lake Superior. The largest of the great lakes it is also the largest body of freshwater on earth and at points it is more than 1,000 feet in depth. The lake rules the land. The lake effect determines the weather in all seasons. It is the primary conduit for moving iron ore, timber and all the goods needed by those living on its shores, but it does not make it easy. The same breezes which can make the summers cool whip up enormous storms and generate upwards of 146 inches of annual snowfall. 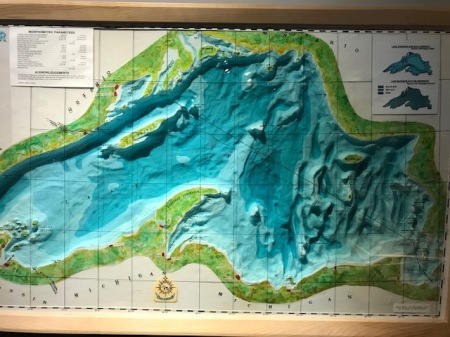 We encountered our friend, William A. Burt, once again with dioramas detailing his surveying forays across northern Michigan and the UP. This was not an easy life. He spent decades battling the wilderness. Indeed, when he made the huge and history-altering discovery of a mountain of iron ore just down the road from where we were staying near Teal Lake and what would become Negaunee, Beginning in Marquette, they had been forced to abandon their horses and spend four days without rations cutting their way through the unforgiving wilderness to reach that iron mountain. Iron ore drove his invention of the solar compass as their magnetic compasses were useless once they found the iron ore.

The living habits of the local Ojibwe were also illustrated and contrasted with the homes of the early white settlers. It is notable that the museum gave equal time and focus to the indigenous people who had been living in this demanding wilderness for thousands of years. Their wigwams were well adapted to the climate. In the winter they stayed warm and cozy with interior fires. In the summer the Ojibwe changed out the walls of their wigwams to allow for air circulation. The first white settlers were hard-pressed to bring civilization to this tough region. Creature comforts were shipped in at great expense and treasured as bulwarks against the harsh environment. Of course, the indigenous Ojibwe and the white settlers would not live in peaceful harmony. As elsewhere, the Ojibwe were pushed out of their lands as the white settlers asserted dominance. 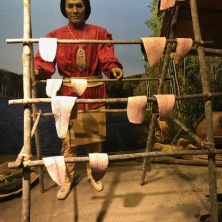 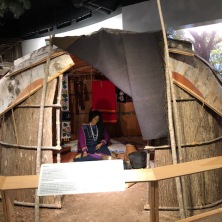 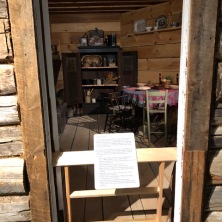 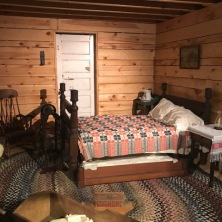 Despite the physical challenges, the potential for wealth and commerce drove development. The second half of the nineteenth century was an all consuming drive to tame the land and extract its riches. Marquette developed as a major port. Constant inventions and improvements expanded the shipping of iron ore. Freighters became gargantuan in size and as the iron ore transited to southern Michigan for processing, ships returned bringing needed goods to the growing city. 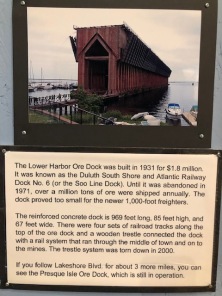 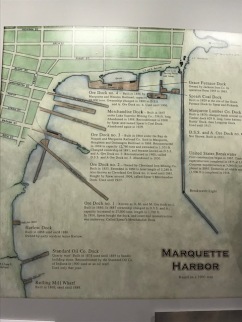 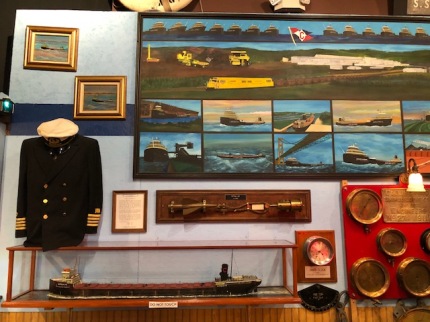 One of my favorite parts of the museum was covered both in the permanent exhibit and in a special exhibit of recently executed examples of the indigenous and imported local crafts. The influence of both Finnish and German immigrants was apparent in exhibits of paper cutting and needlework. Beading and embroidery with moose hair and quills were indigenous. The dress below with the red bodice was actually made recently and combines beading techniques of the Ojibwe with embroidery stitches brought to the area by Finnish settlers. 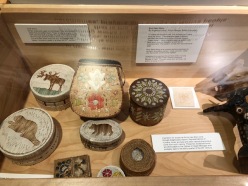 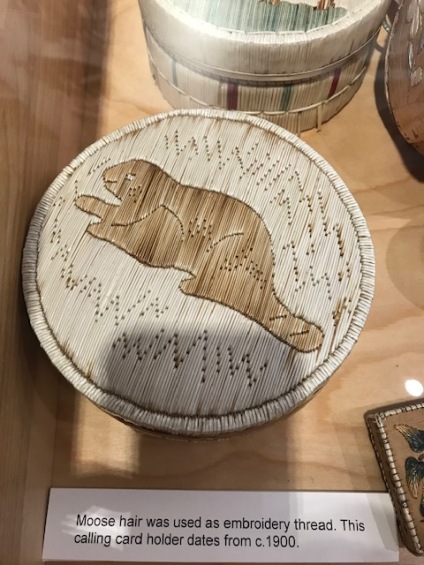 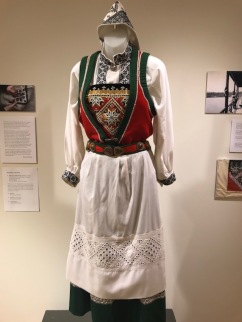 As rich as this area was in natural resources, they were not to be had for the taking.  Bringing civilization to this land and extracting the invaluable natural resources was a harsh and demanding enterprise. This museum succeeded in capturing the compelling struggle and ultimate triumph of man asserting control over and taming this most challenging of environments.