The drive from Pedernales Falls to our next stop at Mission Tejas State Park was tougher than we expected. The mileage wasn’t that far outside our normal range, but the drive seemed to take forever. We stopped for diesel once and then again for lunch.

We were hungry and I had just remarked that the Texas highway department would do us all a favor if they put more rest stops along the highway when a blue rest stop sign appeared. I guess they heard me. It was a little late for lunch, but the rest stop looked green and serene. We pulled into a nice long spot by a picnic table and opened up the trailer. I was in the midst of making sandwiches when another Airstream pulled in to the rest stop! It was very exciting and seconds later our new neighbors were knocking at the door. 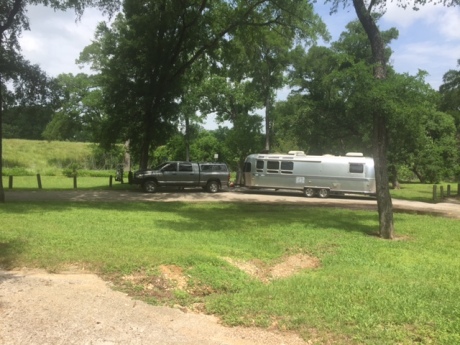 Susan and Bob live in east Texas and had bought their Airstream in 2008. They actually bought their Airstream at Colonial from Patrick! (Patrick Botticelli is a legend in Airstream circles for his videos available on YouTube). That makes us sort of related. Cousins in Airstream ownership. We had two good chats. They were very friendly and enthusiastic. That is how Airstreamers tend to be especially with each other. It is a special society.

Buoyed by our close encounter with another Airstream, we pulled back onto the highway right behind our fellow Airstreamers. We followed them through mile after mile and town after town until a construction stop light divided us. “Goodbye Airstream Buddy!”

It was after 5 when we reached our destination. Mission Tejas State Park is an old CCC camp and was founded and built in 1934. Not a big park, it has only 14 camp sites about half of which are for tent camping. It looked like they were in the midst of building a new park entrance when we were there. We never really did ask about that. 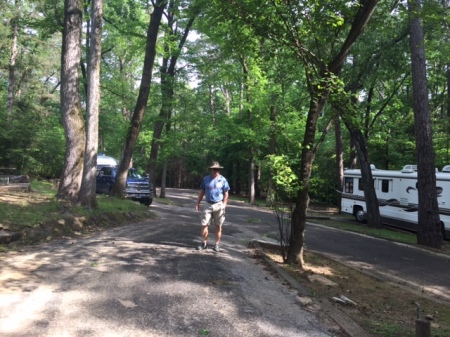 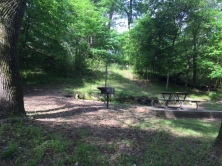 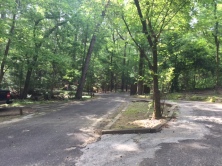 The site the ranger assigned to us was one of the worst we have ever had. It was narrow. It spanned a rise with trees on the street side and behind. The pavement was laughably uneven. It was supposed to be a full hookup, but we could see no evidence of a sewer connection.

In a comedy of errors we hadn’t dumped because we thought we would have a full hookup. When we saw no evidence of a sewer connection, we pulled off the site to head back to the dump station. We were so tired we were almost staggering as we returned to the site and worked with the Andersons to level the side to side of the trailer. We finally got it level. As we finished connecting shore power and water, we found the tiny little opening which was the sewer connection. We never did bother hooking up the sewer, we had already dumped. The site was so uneven we decided not to un-hitch. We would just stay put in the park for two days. 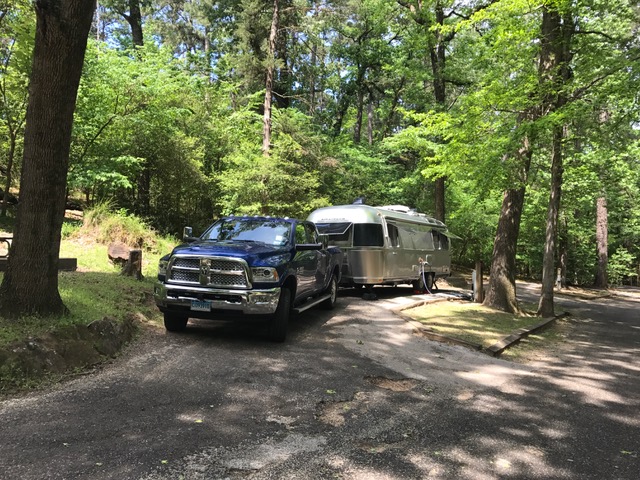 Despite these rather sad beginnings, we liked our site. The trees surrounded us. It was green and leafy. The first day there were few campers. On the second day several families arrived and the forest rang with the kids’ excited voices and happy laughter and the deeper voices of parents chatting and catching up.

The park didn’t have a lot of trails, but there were enough. We hit them first thing the next morning. There was almost no cell signal at our site and we figured we would follow the trails and end up out at ranger headquarters where we could hopefully catch some signal.

Heading out to hike the first thing we did was to walk up the hill behind our site to check out the bathhouse as well as the Commemorative Mission building next to it. The bathhouse looked perfectly fine. It was a study building and clean. It is always reassuring to know a hot shower is attainable. 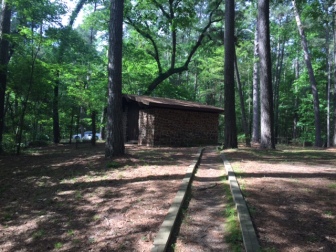 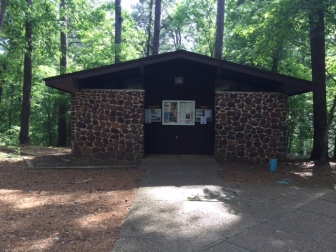 Next we headed to the Commemorative Mission. This was a replica mission building was erected by the CCC when they built the park. 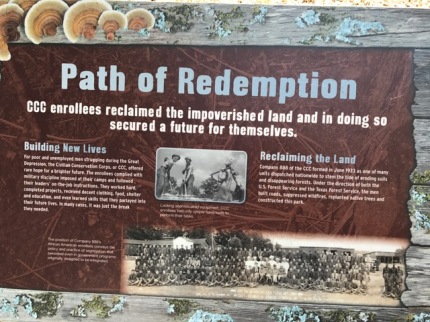 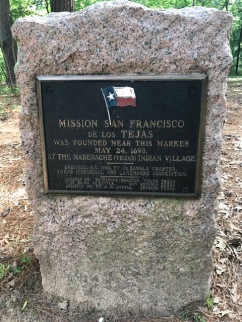 It was a beautifully crafted replica of an old log building. Mission Tejas got its name from the Spanish who tried valiantly to settle the area and convert the local Caddo tribes. Tejas means “friend.” The Caddos were farmers. Ultimately, the Spanish attempt to convert the Caddo and other local tribes was a failure. Disease decimated the local tribes who attributed their illness to baptism. 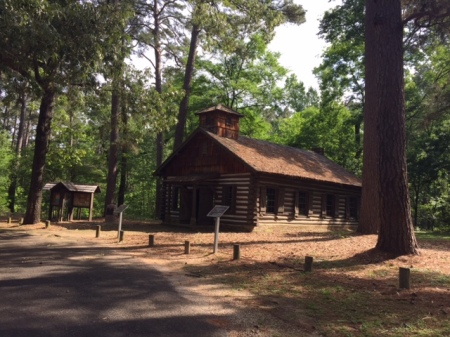 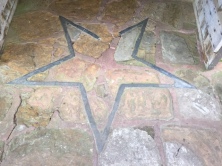 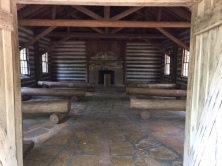 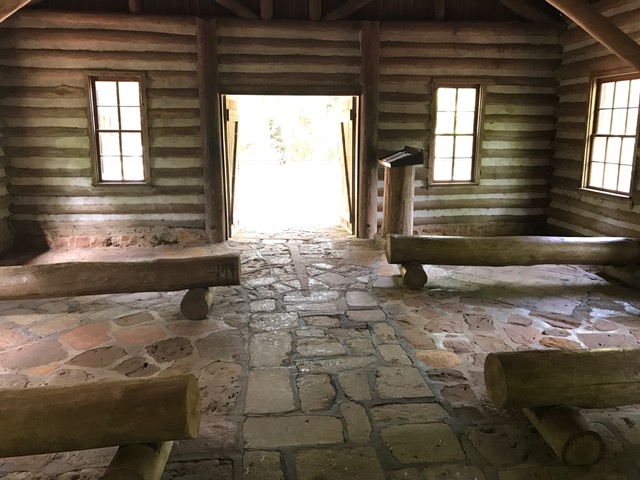 The park is heavily forested with pine, oak and maple. We first walked a nature trail around a pond which let to yet another trail called the Cemetery Hill Trail. 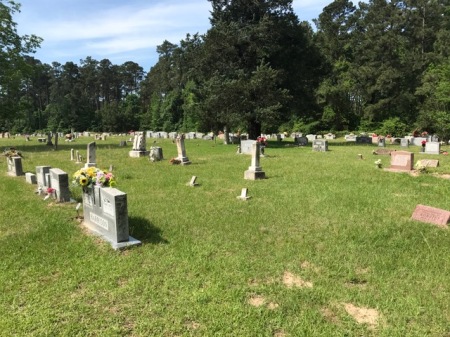 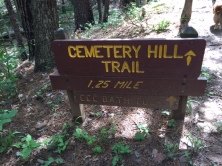 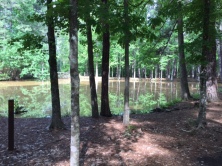 We took a brief detour onto the Lightning Trail. This trail zigzagged through the woods, hence its name, and met back up with the Cemetery Trail which led, as one might suppose, through the woods to a cemetery. This was the local cemetery and still very much in use. The oldest graves, dating back to the 1800’s, intermingled with the newer graves charting generations of local inhabitants. We spent some time assimilating a bit of family history based on the names and dates on graves.

One of the highlight historical sights in this park are the CCC baths. The park literature and signage on the trails exhort the visitor to see the CCC baths. In my mind I was picturing some good-sized bubbling springs which one could paddle around in to get clean and cool. I idly imagines if it was warm enough I could give them a try. Nothing could be further from the truth. When we got to the springs, we saw three holes which punctuated the earth. They were glorified puddles. There were the initial spring, the soaping and cleaning hole and the rinse hole. Imagine scores of sweaty, dirty men bathing in succession in the tiny, mud-lined holes.

The men on the CCC crews lived in primitive conditions and worked really hard. They earned $30 per month, $25 of which was sent home to their families. Most of the men came from poor homes and in the depths of the Depression, these jobs saved their families from starvation and gave them skills and a sense of purpose. They built roads, bridges, parks like this, strung telephone and electrical wire and planted quite literally a billion trees. These CCC camps were stationed all over the country and did so much to build the park system which Jim and I have been so thoroughly enjoying. I give FDR full props for this. The CCC saved lives and constructively employed what would otherwise be lost resources. 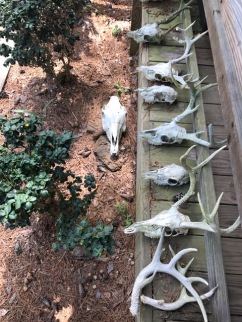 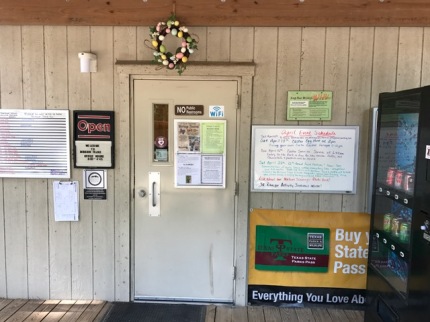 After viewing the CCC baths, we headed along the Big Pine Trail to ranger headquarters. We sat on the old buggy seat on the front porch and Jim downloaded the paper (sadly only part of it came through) and I tried to send a couple emails with little luck. Oh well, the hiking was good enough even without a digital payoff. 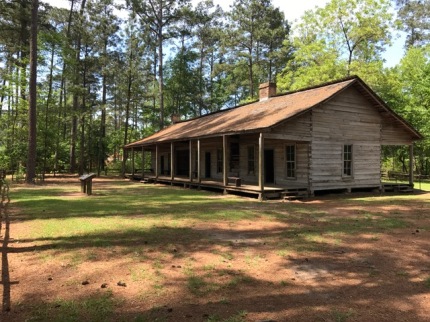 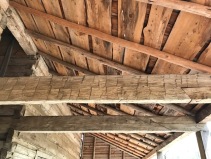 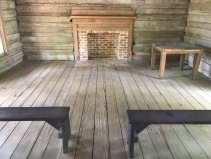 Another major sight at the park is the Joseph Rice Log Home. This cabin was originally erected in another location along El Camino Real (the King’s Highway). Joseph Rice and his wife added to the cabin as they added to their family. It became a stopping off point for travelers. Eventually the cabin was no longer inhabited and was used for storage until it was donated to the park by the family. 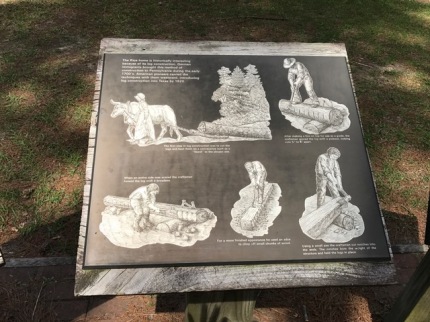 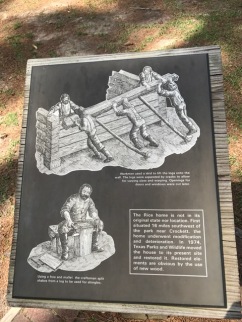 Most fascinating in looking at the cabin was the interpretive information about building techniques. Squaring off the logs, smoothing them and then maneuvering them into place was a substantial undertaking. It is hard to conceive of the painstaking labor involved and the craftsmanship required to get a roof over one’s head. It is possible to see the marks from the shaping tools on the logs. It is all beautifully preserved. 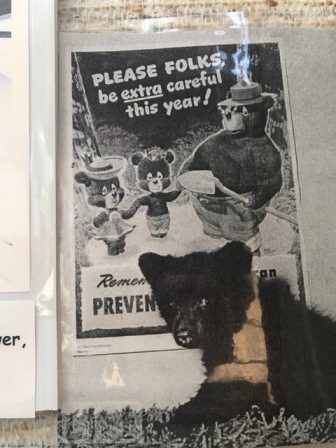 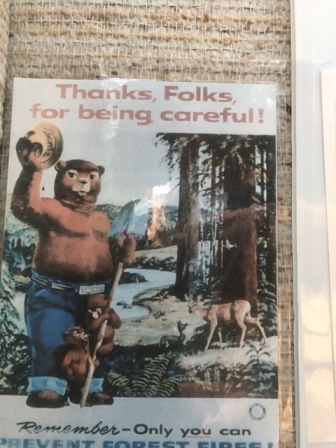 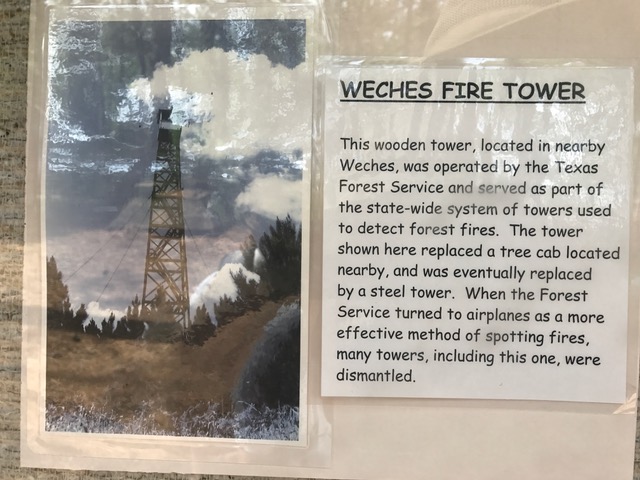 Our return hike to our site followed the Karl Lovett Trail through a pine woods. The ground was thickly carpeted with pine needles and the red earth shone through in spots. The woods we had been in before were dense and green, this section of the park was much more arid and piney. We paused to look at the signage for the old fire towers. Jim always loves a good fire tower. He climbed one once in northern Michigan and it takes little prompting to get him to reminisce about the experience. 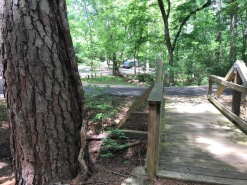 When we had spoken to the ranger at headquarters, she warned us the ticks were bad. When we got back to the trailer, I spread the blue quilted movers blanket we keep in the truck and began a tick check. Bingo. Dakota had a pretty good crop of ticks on him. Jim grabbed the tweezers and fire stick and we removed some ticks. This was an unpleasant reminder that we were no longer in the dry country. We would need to be careful moving forward. 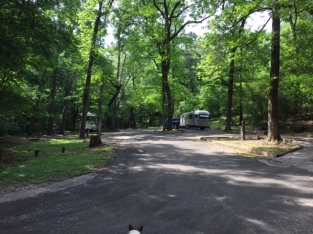 We spent the afternoon reading and knitting (I was knitting, not Jim). It was a delight to use the sturdy bathhouse with hot running water and not the CCC bathtubs.  We enjoyed the quiet and relaxing afternoon. We had a cozy dinner. Since we had not unhitched the next day’s getaway would be swift. We would head to our last park in Texas. The eastward push was really underway.